Boot up the arse

Sometimes all we need is a big boot up the arse.

In my case it was Evil Coach Darth Jim making sure I didn't hoy in the towel half way through a session on the new road at the end of January.  It was a tough one, and I was struggling, I told him I was spent, but he made me finish it off (to be fair at that point I though I'd been finished off already), but it actually got me to my fastest rep of the session.

This, followed up by a tough session on the track, cross country, another tough session (5 x 1000) in Hebburn park, I thought I had absolutely nothing left in the tank for the track on the 6th of Feb. 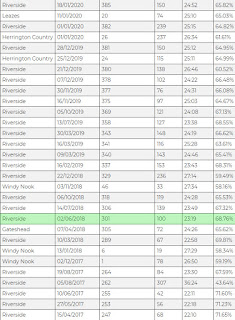 Plus, the furthest I'd ran flat out at that pace was 2 miles.  So on the Saturday I though I'd have a bash at seeing if I could maintain the pace over 2 miles at Riverside, then see how much longer I could go before I blew up.

Got a pretty decent start, not too far from the front, steady away picking off folks on the way round.  Passed through the two mile mark ok, but felt the wheels coming off on the bottom path alongside the river on the final lap (around 2.7 miles).  Got into a bit of a battle with a bloke being dragged round by a spaniel.  To be honest it was only the thought of trying to finish before the dog that got me over the line without being sick. 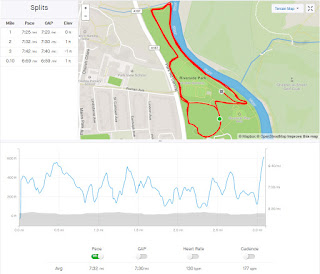 Absolutely delighted with the time - 23:21, and first time I've nipped over 70% age grading in a long time!

Had nothing left in my legs for xc on the Sunday - which turned out to be cancelled due to the weather conditions - car park flooded.  Heather dragged me round an "easy" 4 miler, up past the Angel of the North and down through Longacre Wood, which was like a swamp in places.  To be honest I'm not sure how I would have fared at Thornley so I was relieved in some way. 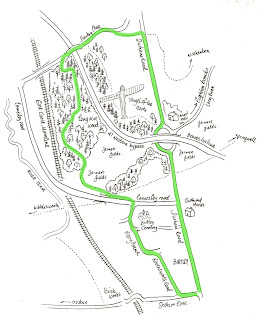 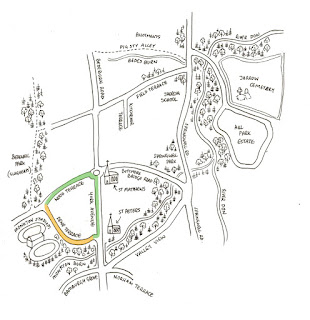 Solid start to the year - long may it continue!
Posted by NEHL Ladies Sec at 12:40 1 comment:

Training update - Run Everyday December (and most of January) 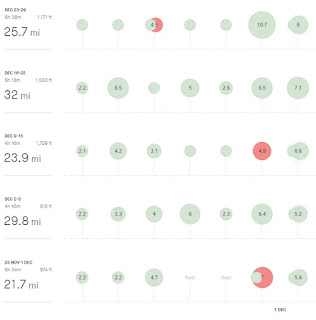 As I have done for the past five years, I'd signed up to Run Everyday December.  it's a great way to keep your training going over the winter, and hopefully continue through into the spring.  So despite my hamstring issue being ever present, I launched myself into it with my usual enthusiasm.  The RED group on Facebook is a great way to keep in touch with fellow December nutters too.

The plan was to try and keep it steady throughout the month, with no daft mileage - objective achieved! (Aside from one 10 miler which was a bimble down to Riverside parkrun and back). 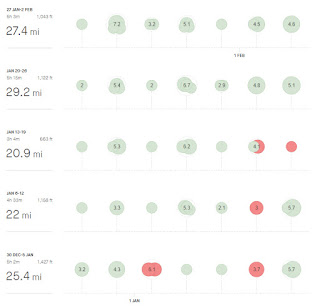 Miles for the month were down on previous years, but still canny.  Given that I'd felt ok for the month I tried to pursue it through January too.  I did actually manage to run all but one day - the day after the Northern XC championships I played golf, then couldn't face going outside in the freezing cold again.  So technically I did something every day.

December only included one race - the Northeastern Cross Country Championships at Alnwick pastures. It was cold, and very very windy, so with the wind chill it felt about -4 or -5, but the Jarrow lasses had a great turn out and won team gold.  I did do a few parkruns too - in an effort to get up to 100 for the decade I'd been doing them.  Managed to crack it on Christmas Day at Herrington!

January has been a lot more busy as far as races are concerned, and February looks jam packed.  Got something on pretty much every weekend coming up, so looks to be a good month of running.

The month kicked off with NEHL Temple Park (Davison Shield), felt ok, but the time was pretty slow to be honest - another day of it blowing a hoolie, then on my own doorstep at Birtley Relays.  Again, the time was pretty naff.  Heather & I headed down to Bedale for the Northern XC Championships, we had a small team of six, but we ran like troopers in the thick mud.  Really enjoyed the course! 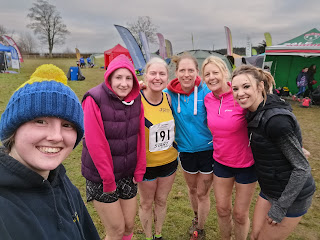 Posted by NEHL Ladies Sec at 05:45 No comments: 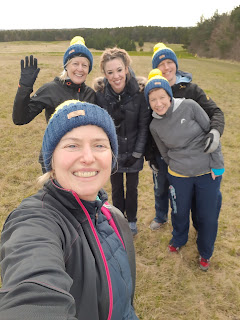 Gonna turn over a new leaf

Trying to keep on top of the NEHL Blog, Twitter, Facebook, as well as work, and actual outdoorsy stuff, means that this blog has been neglected for some time.  So I'll start from now, and go backwards a little before heading forwards again.

Yesterday was the North East Masters (NEMAA) Cross Country Championships.  We Had a canny turn out from Jarrow, including four ladies; myself, Heather, Marsha & Alexis.  Teams are set in ten year age categories, so we didn't have a complete natural team, and so we selected Heather & Marsha to drop into the L35-44 age group - helluva drop for mountain goat Heather, but she was more than up to the job.

I have to add it was blowing a hooligan, and I do mean it - it was wild out there with 45 to 50mph winds.  at some points we were running sideways.  We set off and the fast lasses vanished off into the distance, and I set about trying to get round in a reasonable fashion.  I've had a a prolonged hamstring issue since May 2019, but the soft ground of cross country does seem to favour it better than a hard road surface.

The first lap was mostly me trying to reel Marsha back in, it was hard work in the wind, but by the start of lap two I was hot on her heels.  We worked together for the rest of the race.  I don't think she's a real lover of xc - which I'm trying to change ;) so me shouting at her not to stop was either the boost she needed (or maybe she just finished so I'd shut up lol), but we did get round and finished strong. 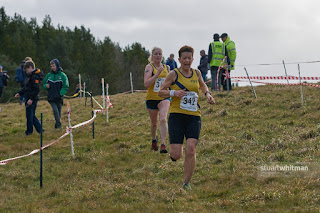 I love cross country, always have, something about being out running in the wild and the mud is a bonus. 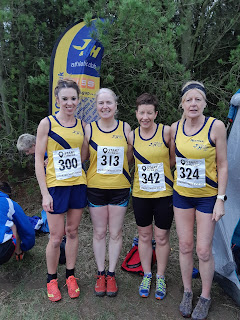 Many congratulations to Alexis - who was flying along - finishing third overall, and to Heather who retained her ladies V55 gold again.

I haven't seen the team results yet so I don't know if they managed any medals.  I'll post a link to the results when they turn up. 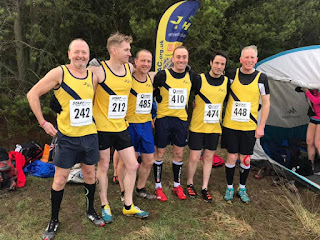 The lads had two teams out, good to see some new faces - and Michael Bunn (448), who I haven't seen racing for ages!  That club vest he wears is the first ever Jarrow vest I wore for cross country in 2005.  I was asked to take part at Chester-le-Street XC, but had no idea what to expect, I had to borrow some spikes from one of the juniors, and I had no club vest, so Michael gave me his (which he'd just ran in), it was dripping!  Got round anyways, and bought my own vest asap :D 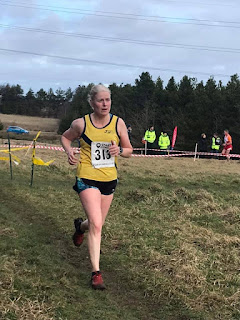 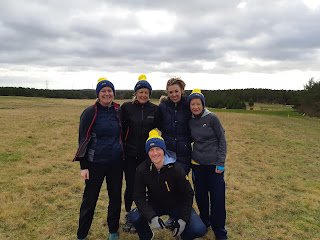 Posted by NEHL Ladies Sec at 00:07 No comments:

Golf and running, actually mostly golf with a tiny bit of running

It's been a great month of sport for me, despite having sprained my ankle whilst out walking the dogs at the end of last month.  I've missed a few games of golf, and my running has been right off the boil, but it was nice to get out and play. 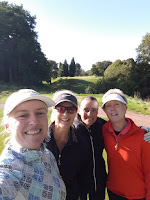 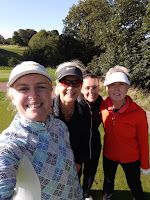 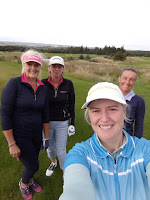 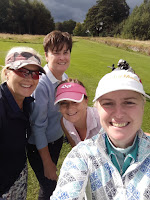 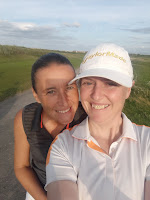 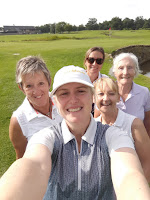 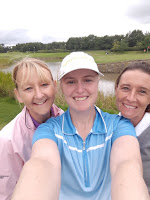 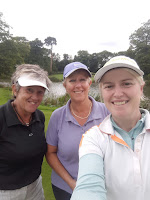 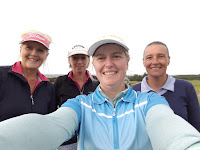 Many thanks to my playing partners in the various teams I've been part of over the season. Including Linda, Pat, Cath, Sue, Claire, Karen, Lesley, Anne, Janis, Sally, Yvonne, Lesley & Valda (Houghton), and Joan (Hobson).

Had a great day out today at Bedlingtonshire GC too with Pat & Linda, despite torrential rain on the 16th, really enjoyed the course.


I also had the pleasure of watching a load of North East athletes pick up British Masters medals in the BMAF 10000m championships at Monkton yesterday (same day as the NECAA/NEMAA Pentathlon), many grats to the winners, who battled through bouts of rain and wind.  Wish I could have ran but my ankle wasn't strong enough yet, so I was happy to run about and shout at people running! 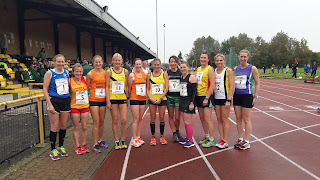 Posted by NEHL Ladies Sec at 10:56 No comments: 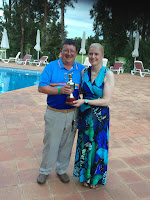 I've got running, and my other passion: Golf.  It's a game for masochists. It's competitive, frustrating and enjoyable all at the same time.  It's like snooker on crack, it is all about angles, so you have to think about what you'd like to achieve with a shot, but tiny little variations make a huge difference to the outcome; if anyone wanted a study for Chaos Theory, then golf is the sport.

Saying all that, the better you get the more sensible you can be with your expectations, and the easier it is to try and work out what the wind is going to do, or the direction the ball may bounce when it hits the ground.  That's not to say it won't hit a stone or sprinkler head and shoot off in a random direction mind you, so it's still pretty random.

Since 2012 I've come down from 34 to 14 in handicap (the number of shots over par I'm expected to go round in).  It should be the best I'm able to play to, and I have got round on handicap a few times this year, provided I don't get myself in a right pickle or go for daft shots that Seve would be proud of.

Really enjoying playing mixed with Mr T, opens with the girls, and the team matches for Tyneside: have actually played more matches than I've played singles comps this year!

Posted by NEHL Ladies Sec at 02:30 No comments: 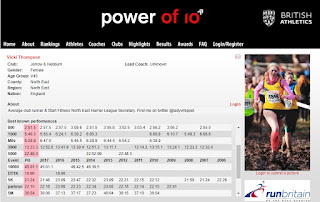 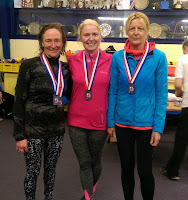 I do still love cross country, and it's my aim to try and compete at most of them this year.  We now have chip timing for the league so my workload on raceday is dramatically reduced.  There's no excuse for me not to compete other than being totally unfit.

Posted by NEHL Ladies Sec at 00:04 No comments: 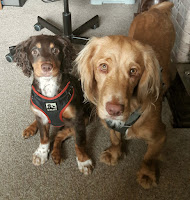 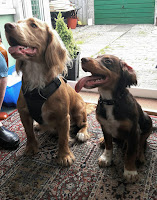 I'd totally forgot about my blog, it was just one of those things I didn't remember I had, a bit like finding a nice coat at the back of a wardrobe.  I needed to set up an easy update news thing for the Harrier League and this was the quick option.  So here I am back after a five year break!

Major changes: nothing apart from us losing our wonderful dog Murphy aged 13, and the addition of two crazy spaniel puppies.  They are completely nuts, but adorable.

Posted by NEHL Ladies Sec at 23:50 No comments: